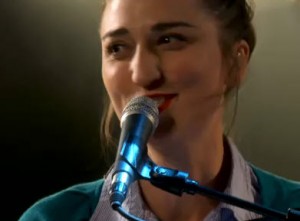 Artists have many reasons why they cover other artists music. ?At their core they are still fans. Music resonates with them just like the average teenage girl, college kid or mother of two. They happen to have?a platform when they can pay tribute,?if they so choose,?to specific songs they connect with. Yellow is song originally written and performed by the band Coldplay for their 2000 release Parachutes. Sara covered the song while playing at the PC Richards Theater in Tribeca, NYC on Jan 27th, 2011. During the songs presell she states that she got the Coldplay album while in a Study Abroad Program in Italy and that Yellow is one of her “all time favorite songs.” It’s a song that got her through some dark times. Her live version recorded in 2011 is just her and the piano, and her strong connection with Yellow translates as she sings. The YouTube link from the user itsalluncharted is below.

That premise of the healing power of music is the cornerstone of Musical Morphine. This healing power enters the?body through the fingertips, and travels up the tendons like a superhighway to the brain. While it?s on its way, the music seeps into the bone marrow? depositing little hits of musical morphine along the way allowing the listener to survive for another day.

Chris Martin, the front man for the band Coldplay revealed on the Howard Stern show that the lyric “yellow” has no meaning and that it’s was only meant to be a place holder for another lyric. But nothing worked quite like Yellow and so it stuck. I think, like the color, it’s brilliant. Yellow takes on the persona of an everything word. A fill in the blank, in the moment Smurfy kind of word. It can be a replacement for love, comfort, happiness, pain, sadness, joy. As a result we are a part of the song, forming our own lyrics like a choose your own adventure book and joining along in the musical process. For me Yellow in the lyrics is the word that represents the unconditional love one person feels for someone else. Be it a spouse, child, parent or lost soulmate or friend. There are certainly a few people in my life that I’d bleed myself dry.

What does Yellow mean for you?

…….
Thanks for stopping by for a visit.
Why not consider subscribing via email and never miss a post?

She Used To Be Mine